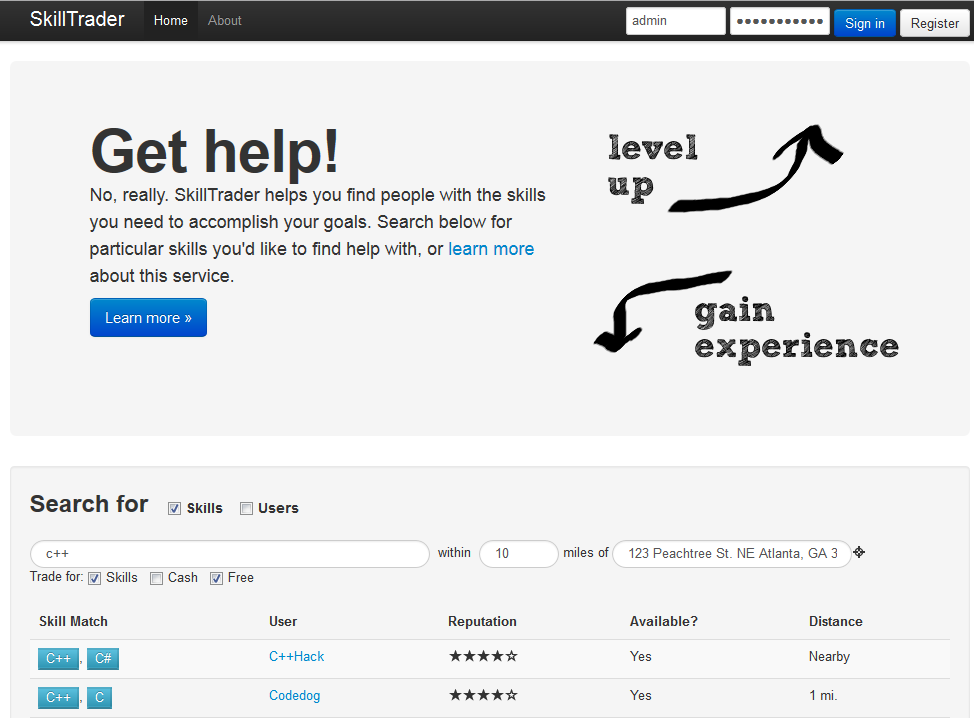 Get help! No, really. SkillTrader helps you find people with the skills you need to accomplish your goals.

I created this project with Jithu Maliakal, Michael Schueth, and Spencer Hamilton. My involvement included:

This class was my first opportunity to learn how to conduct user interface critiques and user research. First, we needed to identify a problem to work with in the domain of social networking.

I pointed out simply that people tend to have problems, and usually they’re easily fixable. For these problems, there often exist other people who already have some skills in solving these problems; they may even have problems of their own. Unfortunately, the availability of these people who solve problems are obfuscated by a lack of networking, or these people are professionals who tend to take on bigger problems than ones many people have such as fixing a car, learning to ski, or getting some help with jQuery.

SkillTrader aimed to connect these people, who may either want to share their skills or seek help from others. This could be accomplished by trading skill for skill, skill for money, or just being someone pursuing a hobby who expects nothing in return. An important element in SkillTrader is that the users are facilitated rather than guided by our service.

For example, a professional painter may be having car trouble – nothing major, but the painter is definitely not experienced with what goes on under the hood and can’t afford a $100 estimate by a mechanic. Meanwhile, a car buff who has lovingly tended to his ‘95 Impala for years is looking for a creative field to break into. These two strangers have a goal but neither goal is quite pressing enough to consider spending a great deal of money anytime soon. Instead, they could join SkillTrader to network with others with skills such as these and find their answer.

We compiled this report from our research and planning.

Our final product was completed using Twitter Bootstrap as a quick prototyping framework. I handled the majority of the layout, design, and programming. We compiled our final report from further design iterations on the site as well as usability research, including interviews and think-aloud exercises.