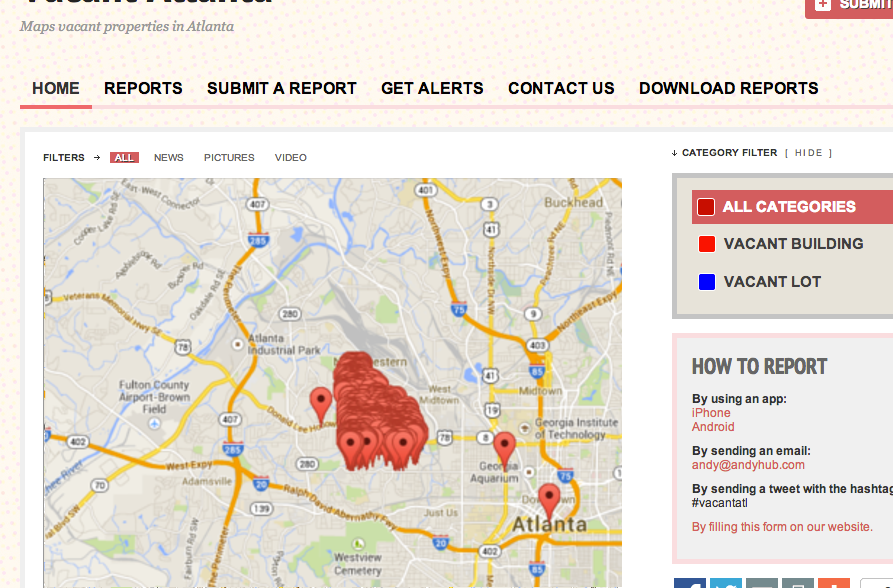 The project started with an idea by Rodney Milton from Atlanta’s Office of Housing during Atlanta’s first Govathon in February 2013. His idea was to build a service that would help discover and record data on vacant properties. I suggested we gear the service toward residents of these communities, allowing them to directly participate in their government and contribute data about their own neighborhood, instead of an external government trying to reach into it. Musa Siddeeq and I worked over the next 12 hours to develop a conceptual demo (code on Github) of a framework for reporting and mapping vacant and abandoned properties.

This demo used vacancy data collected by the city from the Grant Park neighborhood, one of the areas in Atlanta with the highest density of abandoned properties. However, we also expected citizens would also submit reports of vacant properties. Text messaging (SMS) is a common and very accessible technology among almost all Atlanta residents, so we used that as the primary means of reporting via Twilio. The user would text an address and photo of the property to our service, which would record and map it. 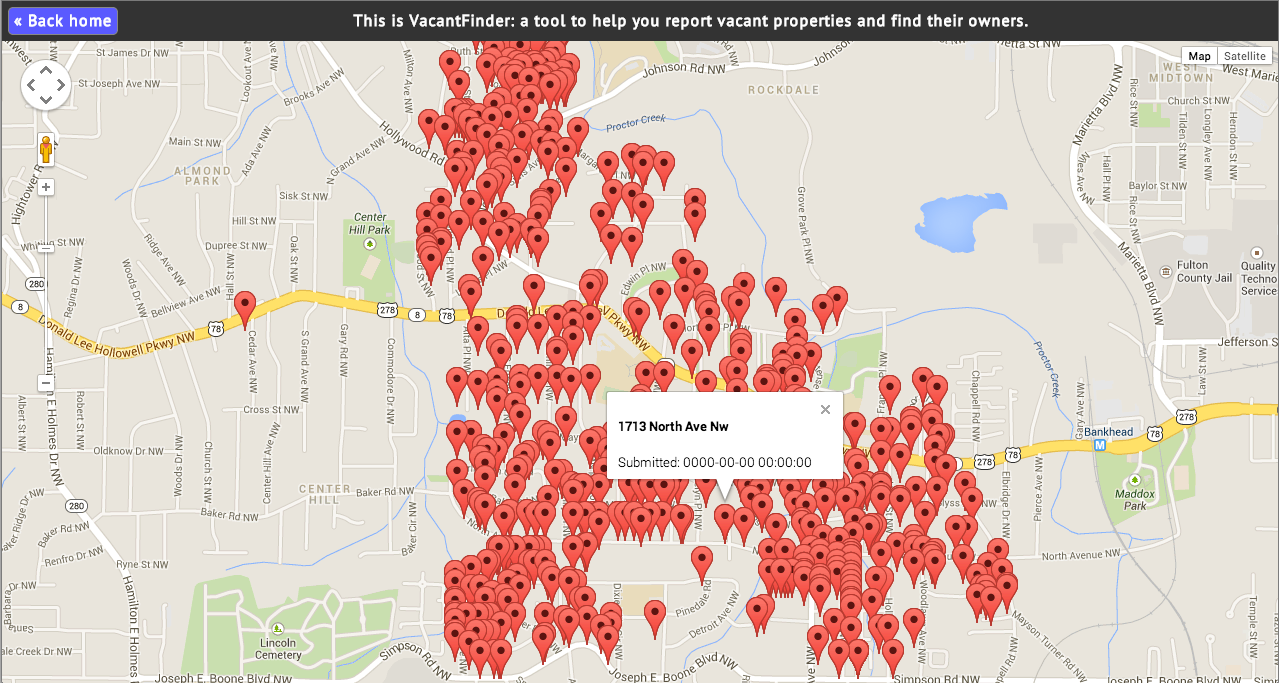 Milton was very enthusiastic about our concept and spurred me to continue development as he pitched it to others at the city council.

The initial concept was geared more towards data gathering and speculation on its representation. I have continued to develop both the concept and the code, adding functionality to make this tool more useful for both government and citizens. This includes interaction capabilities to provide per-property data, such as address and date of its report as vacant, as well as who or what organization owns the property, as reported by the government in a public database. Further work is needed on the interface; however, the functional backend is a significant advancement and allows for quick and easy import of more data given the necessary affordances on a future front-end interface.

Data from the city and citizens’ reports, along with a database of properties registered with the city government, is downloaded and displayed as a map. The user may click one of the properties on the map to view its address, photo (if reported), date reported as vacant, and its current owner (often a bank, likely due to foreclosures). I conceive VacantFinder as a means rather than an end, providing an extensible platform on which developers may build civic media tools related to vacant properties in Atlanta.

I revisited VacantFinder again in my involvement with English Avenue and project studios at Georgia Tech, as well as during the National Civic Day of Hacking, where I worked on a challenge from the Atlanta Metro Food & Farm Network (AMFFN). Combining these perspectives, I found that vacant property was highly valuable even while unused: it could host a community garden! At the hackathon, I developed a solution similar to the original VacantFinder concept using the more stable, established platform Ushahidi. The final VacantFinder project should integrate all these concepts into a Ushahidi-based platform. I will likely continue this at some point during my M.S. HCI degree program.