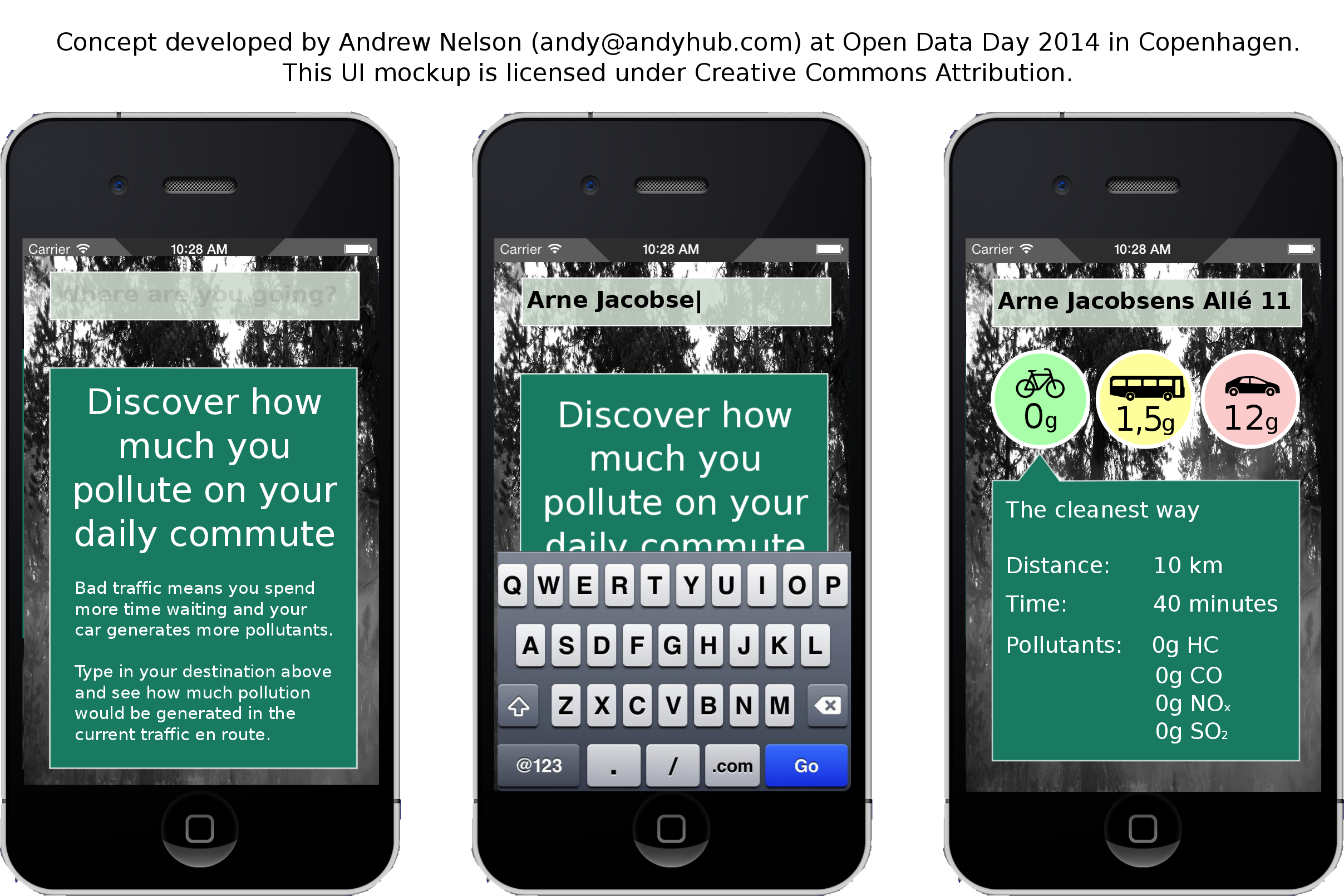 While I was in Copenhagen, I attended the Open Data Day hackathon. I decided to work with Open Data Aarhus (a working group of Smart Aarhus), or ODAA, and their excellent collection of open data to investigate the extent of open data and open government Denmark. This trove includes real-time traffic data collected from roadside bluetooth detectors that quantify the number and frequency of cars passing them, providing a metric for congestion. ODAA tasked us to use this open data to address societal challenges, including mobility and pollution.

Passenger vehicles alone contribute over 10% of greenhouse gases in the U.S. Although convenience factors are very influential, perhaps being more aware of the pollution generated by a transportation mode, people would be less inclined to commute by personal passenger vehicles. My concept “Should I pollute today?” would calculate how much greenhouse gas would be released by the user’s choice of transportation, given current traffic conditions, en route to their destination. It received a lot of interest from ODAA, including Michelle Bak Mikkelsen, with whom I conducted an analysis of ODAA and Smart Aarhus’ organization structure. UI mockup of the concept

The concept would ideally be integrated into an existing directions/routing service, since very little information is displayed. When the user requests a route to their destination and mode of transportation (e.g. car, bus, train, bike), the service would fetch the traffic data from ODAA and calculate the amount of pollution generated en route. It could also suggest an alternative, less pollutant mode if convenience were the only obstacle (i.e. the user is within acceptable distance and able to access that mode).

The calculation is based on current vehicle speeds on each segment of the route, calculated by some heuristic analysis of how frequently a bluetooth signal is detected at that time compared with other times. With the vehicle speed of each segment, the EPA’s Motor Vehicle Emission Simulator could estimate the pollution generated by the user’s chosen mode of transportation. Without knowing the actual condition and type of vehicle, the estimate can vary widely but will differ greatly compared to public transportation. Naturally, walking or biking would be the optimal choice when considering pollution, but it would only be suggested if the routing service determines it is feasible (e.g. not a 3-hour walk) and safe (e.g. not biking on a 6-lane highway). In this way, this concept would best serve a comparative decision-making feature to an existing service rather than a standalone quantified self app.