The topics of smart cities and the internet of things (IoT) have been trending as new models for social and civic interconnectedness and motivators for networked technologies. Since 2012, Chicago has developed a network of sensors called the Array of Things (AoT) that collect data that would help the government and citizens to improve the city’s livability. In 2015 the White House held a forum and started an initiative that resulted in dozens of cities and universities collaborating on local smart city work. Now, Atlanta is poised to create something that may be similar to Chicago’s AoT with Georgia Tech and Georgia State University, as well as many industry partners.

In 2012, a University of Chicago and Argonne National Laboratory workshop on data collection helped high schoolers develop sensors to deploy around downtown Chicago. Despite support from city hall, the technical limitations of power and network access to the sensors thwarted their plans and had to instead be deployed in the students’ homes. Following this, the workshop organizers and more from the School of the Art Institute of Chicago iterated on the concept to create what they called the Array of Things (AoT), compared to the trendy tech topic internet of things (IoT).

According to their website, Chicago’s AoT is an urban sensing project, a network of interactive, modular sensor boxes that will be installed around Chicago to collect real-time data on factors that impact the city’s livability, including environment, infrastructure, and activity. The goal is to enable the city’s government and citizens to access and analyze this data to make Chicago healthier, more livable, and more efficient. It started with 20 sensors on the University of Chicago’s campus, relying on its more reliable infrastructure, and plans to add hundreds more across the city by 2017.

Chicago’s AoT initiative is overseen by Chicago’s Chief Information Officer, the director of the University of Chicago’s Urban Center for Computation & Data, and a committee of business, civic, research, and community leaders and members. They work with an external committee dedicated to the sensors’ security and the privacy policy on the data they collect, as well as with other city departments and citizen organizations for the project’s direction. The initiative is now partnering with universities in nine cities in North America and Europe to deploy their sensors.

More information on Chicago’s AoT and their sensors can be found at their website: https://arrayofthings.github.io

In 2015, the White House held a Smart Cities Forum that kicked off their Smart Cities Initiative that offers $160 million of federal grants to smart city programs. In a joint letter to the President, 21 cities and their universities have agreed to collaborate on such a program, comprising the Metrolab Network. The City of Atlanta has partnered with Georgia Tech and Georgia State University, primarily for technology and policy studies respectively,

In a press release following the forum, Atlanta Mayor Kasim Reed was earnest for the two universities to develop innovative solutions to pressing infrastructure and service challenges. Georgia Tech’s president said the university could take its development of potential solutions to infrastructure challenges to the next level, and Georgia State’s president welcomed the opportunity to find creative solutions to critical societal issues.There are also a fair number of companies who are actively developing, researching, and funding research into the commercial space for smart city products and services.

Past the press release, there are not many commitments yet made by groups within Georgia Tech. The Center for Urban Innovation (CUI) is the main interface with the Metrolab Network, and the Center for the Development and Application of Internet of Things Technologies (CDAIT) is the main interface with formal industry partnerships. The Georgia Tech Research Institute (GTRI) is normally occupied with Department of Defense and highly technical work, so they are narrowly involved in the technical aspects of sensor development, and the Office of Information Technology would be concerned with networking issues. These offices have generally handed off the creative aspect of what smart city and AoT technology means, what it would entail, and a long-term plan for development to the Research Network Operations Center (RNOC) and the Public Design Workshop (PDW).

RNOC exists to accelerate innovation in networking, computing, mobility and convergence by enabling communities of collaboration. GT-RNOC provides, supports and maintains a unique end-to-end infrastructure within a realistic operational setting, accessible to world class students, researchers, and innovators from various disciplines across the many Georgia Tech research centers. It leverages the unique position of Georgia Tech as a preeminent network and network service hub in the state, the region, and increasingly in the world. The IoT working group within RNOC aids this AoT work by hosting code on Github, a mailing list for communication, and a space for weekly meetings.

There are three stages that we intend to complete by April 2016:

Generalizing an array of things

First, we would like to generalize the Array of Things (AoT) as an idea of how things big and small can be made accessible through a common network and identifiable as an array of networked devices.

Although the internet of things has myriad definitions, they generally describe a collection of devices being interconnected and influencing each other’s behavior. There’s often notions of autonomy and if-this-then-that type logic of machine-to-machine communication. The array of things as a concept shifts the locus of control away from the machine and to whatever is defining the array. That may be anyone or anything, so it does not entirely eliminate the possibility of an autonomous machine-controlled array of things.

An example of an array of things may be a collection of yard sprinklers as the array controlled by a house’s central watering system. This defined array of yard sprinklers may also be referenced by the homeowner through some application to turn them on from work. It may also publicly expose some controls such as water usage, which the city government may monitor to gauge overall water usage in drought conditions. The yard sprinkler array in this case is one array within the government’s array of water devices throughout the city. By selectively exposing certain controls and monitors of things, as well as identifying them through a publicly defined array, the internet of things becomes more organized and purposeful than your vacuum cleaner talking to your toaster.

An important first step to this is involving the public from the beginning. This step was investigated in a three-month project in 2016, documented on the ProtoCity project page.

By learning from Chicago’s Array of Things Initiative, the White House’s Smart Cities Initiative, and Atlanta’s Metrolab Network intentions, this goal will be complete when people are able to do the following reliably:

Georgia Tech has committed to the Metrolab Network and Chicago’s AoT Initiative, opening the campus up to AoT experimentation. Companies like AT&T and Verizon also use the area to test new technologies at scale. This is because Tech’s campus is highly connected to both power and internet infrastructure, has its own public resources like transportation, and has mixed residential, commercial, and research building use. These factors make it a useful place to test new technologies in an ideal environment. 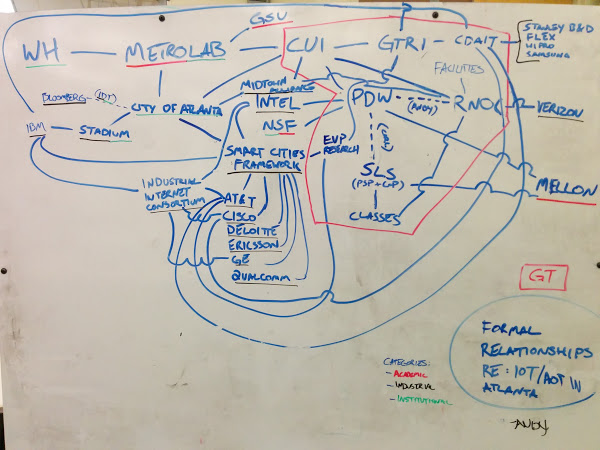 But Georgia Tech is not the extent of its and the city’s commitments. Just as Chicago’s AoT started on campus, there will be significant hurdles in scaling this to downtown Atlanta, the city limits, and perhaps even to the entire metro area. Georgia Tech’s Office of Information Technology (OIT) boasts a superb on-campus network, but that does not exist on most city streets, halfway up a 100-story building, or in the middle of parks. One attempt at this has been started in Atlanta as part of my pilot project ProtoCity.

This goal here will be complete when a device can be at least a semi-reliable node in Atlanta’s AoT in the following conditions:

Making sense of the data

Once data from an array of things are available, the City of Atlanta could then use this to make more data-influenced decisions. Right now, issues around town are reported by utilities with their own sensors and staff, residents calling 311 and attending town halls, and news stories. These all have a significant reporting turnaround and then a usually longer bureaucratic turnaround to do something about it.

With near-real-time data made available by sensors throughout the city, the city could be better enabled to make more knowledgeable and rapid decisions. They could also have immediate access to sensors on trees, parks, sidewalks, fire trucks, highway bridges, downtown buildings, sewer drains, and more without having to dispatch a public worker. More than just sensing, nodes in Atlanta’s AoT can be environmental monitors, digital displays, street crossing buttons, automated systems, and other interactive media, enabling bidirectional communication. What if something like a street sign could ask a passerby for help? The city could read the state of the thing, and if it’s something anyone could fix, then a display on the device could give instructions on how to do so.

The city wants a tool that could help public workers in offices and repair trucks make sense of the firehose of data that an AoT could provide, and then use that tool to make decisions.

In Atlanta, starting at Georgia Tech, we are designing this future with all Atlanta residents as key stakeholders. The technology specifications and protocol will be open to allow anyone to create their own node and make it connectable to Atlanta’s AoT. A public directory of things will be required to discover these nodes, and a common protocol will ensure all nodes can be connected to reliably. For this to work off of Georgia Tech’s ideal camus environment, there are major networking and power issues among others that must be detailed on how to overcome. Once this AoT is in place, the city must then be able to use this data to make more data-influenced decisions.

This is a collaboration facilitated by RNOC’s Internet of Things working group, who maintains this wiki and looks to collaborate with and empower researchers and community partners. There is also a public channel for discussing this with Code For Atlanta via their Slack channel: https://codeforatlanta.slack.com/messages/array-of-things/