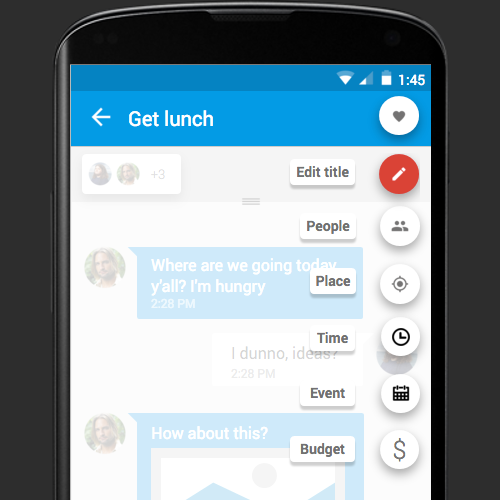 This roughly six-hour project was done as an individual interview exercise for Google’s designers to see how I approach certain design problems., using whatever process I would like. Of three prompts, I chose their “party assistant” prompt asking how to make ad-hoc event coordination and individual assistance for attendees to be convenient and comfortable.

This technology (and probably similar designs) is something that can be used in many contexts, not just as a party assistant. Generally put, it’s a distributed knowledge network focused on a finite set of states with the goal of a single state that may change with minimal loss of agreement among parties. It’d probably sell well as a party assistant, but from a cursory literature review, it could probably be very valuable to inter-company communications and for knowledge dissemination goals like what the Bill & Melinda Gates Foundation does. This looked like a good chance to work on one and multiple things simultaneously. A good use of the three to five hours the Google recruiter suggested!

In that time, Google requested that I design a low fidelity overview of the app and a high fidelity mockup of at least one screen. Even for a design exercise, I feel uncomfortable if I don’t do research first. So I spent a couple hours on that and then moved on to the interaction design:

Why would Google want a party assistant?

As pitched, Google implies something convenience and comfort as important, comparing it to a daily routine, which other Google services can definitely provide access to. if the generic version of the party assistant is involving some number of people in the process of converging on a state, this could be considered persuasive and collaborative technology.

Google’s Location History service can be used to provide location associations to other data, including user notes on Keep, timely information for buses, alerts to kidnappings, sales and deals at stores, and other opportunities for monetization. Google is a company based on selling data and ads, so that’s why they’d want location info. If that can be used persuasively, that could lead to more confidence in converting ad occurrence to ad engagements, making each unit of ad sales more valuable as well as a service if provided by Google for making this conversion. But being persuaded is not a comfortable experience, so that should be mediated by user’s preferences (inferred and user-set). In addition, if it’s collaborative, then it can be more convenient since highly active group participants can do more work than the less active participants. It also makes gathering and sharing data associations more convenient for Google. But it’s less convenient for Google, since these people may be planning a big event with lots of different sorts of data (locations, times, foods, favorite games, notes, animals, memes, videos, etc). So that would require lots of processing work.

What are some existing “party assistants”?

What are some existing collaborative event assistants?

How will Google be most competitive?

MIT Sloan Management Review published in 2013 a guide to designing effective knowledge networks, or collections of heterogeneous stakeholders to invent and share knowledge. Without getting into the delineations of data, knowledge, truth, and information, knowledge in the sense of a party planning app means “I heard about this thing happening this weekend,” and “I saw my friend was going to an event.” Of the four common network goals the article described, coordination and supporting individual members is of most importance to this product.

Following their framework, this application would be effective at helping some friends figure out what to do by providing a well designed set of conditions the participants can agree on and feedback loops to sustain the dynamic interactions of participating in an event.

Looking to some of my friends, I found that most of them use group chats in messaging app to do ad hoc event planning and coordination. Not getting into a full task analysis, suffice to say that they use a litany of other apps and services and websites along the way, but all the information worth sharing goes into the messaging app. This leaves a lot of people out of the loop if they miss the opportunity to weigh in at critical decision points, and if it’s a very busy thread some information may be buried for infrequent readers.

Considering Who’s Down is already out there, we can build off of that and Hangouts to combine many of the features in other services. Compared to Biletu, though, Google could use some web feed aggregation to compete there. Services like Places, Directions, Maps, Location History, Calendar, Search History, and third-party applications like Facebook and other social media for specific interests would make for a more robust service design than anything else.

See my lo-fi walkthrough of sketches for these features and my high fidelity Axure prototype (or download it). 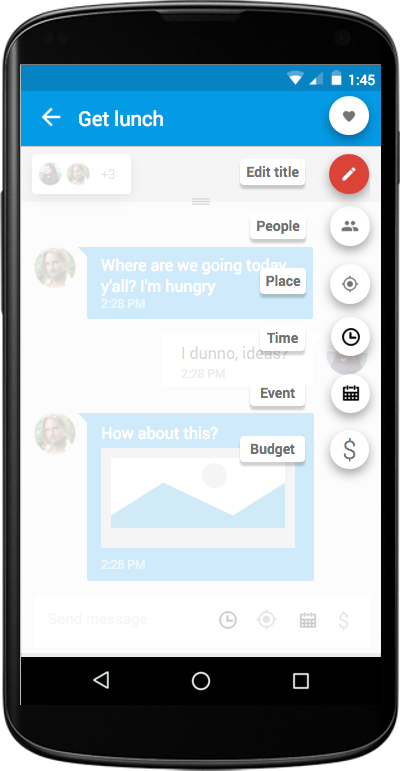